The Productivity Project by Chris Bailey: My 3 Takeaways 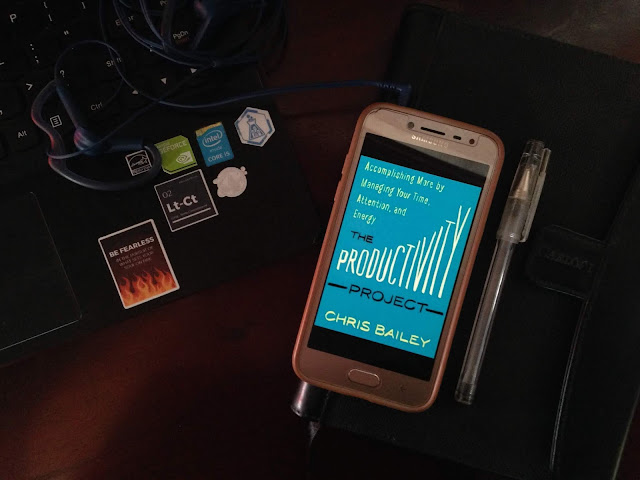 “Busyness is no different from laziness when it doesn’t lead you to accomplish anything.”
― Chris Bailey, The Productivity Project: Proven Ways to Become More Awesome

Being on a journey of understanding people, part of my discovery is how to become better at being productive. At work, as part of our self- training, I was introduced to this book titled "The Productivity Project" by Chris Bailey. The book presented productivity concepts that I was familiar already but there were a few that were new to me, so here are my three takeaways from the book.

Time, Energy and Focus
Chris Bailey mentioned 3 important things one needs in productivity. These are time, energy and focus. These 3 things are very crucial to understanding productivity. The concept is, among the 3, time is the nonrenewable resource. We all only have 24 hours every day, how come some people are more productive than others? Considering that you might not have the resource to hire people to do the work for you thus making more time, the key is to make smart use of energy and focus.

This is where so many things came to me already. I now had an idea of why I am not productive no matter how many hours I work. First is my lack of focus. I have too many things in my mind and it is just not great for my focus. What I am currently doing now is just to take on tasks three at a time, like how Chris suggests. I just focus on three things daily. Whatever is not so important, I choose to do another day.

The second thing is my lack of energy. I have succumbed to the idea that I might just be tired daily for the rest of my life and it's all part of getting older, but Chris says differently. I realized, there are things that I could do. The first is just to get better sleep. Better sleep does not mean to sleep early then wake up early. That concept is BS. Each of our bodies has its own sleep cycle. I know. Most of us just have to wake up at 6 to get to work at 8 but the point is, there is no evidence pointing out that people who wake up early are more productive. So now, since I have the luxury to do so, I wake up according to my body clock. I found out I am a morning person after all and my brain has an optimum level of focus at around 10am. So now, I try to do really mind taxing things around that time when I have the energy and focus to do so.

Mind Wandering is not an Evil on its Own
I am one of those people who can't help but daydream and just get lost in my own imagination and thoughts. There is nothing wrong with that but if it happens in the middle of working on important and brain heavy tasks at work or just at home, it really derails me from doing a focused job. It turns out, the problem with me was that I did not set aside time for mind wandering. In my pursuit of doing as much as I could in a day, I did not set aside time for my mind to do its own relaxing, fun and leisurely thing. After having read that Chris Bailey makes time for mind wandering, I currently try to practice it daily too. Mind-wandering could be done together with other activities, such as exercising, listening to music, nature walk and one of my favorites is when reading. I take reading very seriously no matter the genre but I let my mind wander too during such a time. To daydream about what I would have done if I was the lead character or what things I have read shall I be applying to my life are one of those things where I let my mind run wild in.

Identify the tasks that are the most high impact
Now here's where things got interesting to me. In the book, it was, again and again, emphasized that we only do things that are truly important to us, thus Chris's advise to just take on 3 important tasks daily. This will make anyone get to really thinking. What are the most important things for me that I need to focus on a daily, weekly, monthly or yearly basis?

I have a tendency to take on so many things. I am just wired that way because I am a learning whore. I just like to learn without bothering to know which skills are useful and which ones are not. I want to learn everything but I realized that I am not being productive this way. So here, I put on my own twist. I have read in another productivity article that there are tasks that are building blocks of productivity or building blocks of value. Like how one learns to write very well now so that their writing becomes very efficient and much better in the future. Or how someone tries to automate tasks so that one can focus on other things while the automation gets rolling. So now, I have identified 3 things in my life at the moment that I think would build value for me in the long run. Now, I concentrate on just these three things for the rest of the year, and I let go of the rest of my other goals until these 3 are finally going and rolling for me, only then will I take on another 3 goals.

Although after reading the book, I felt equipped with productivity already, I am not going to put it out there that I am a changed being already. Although the little changes I do now are really helping clear my head, there is much to improve yet, so one more bonus tip from Chris, the key is to do one habit change at a time that compounds to lifestyle change that will really stick with you for a long time.